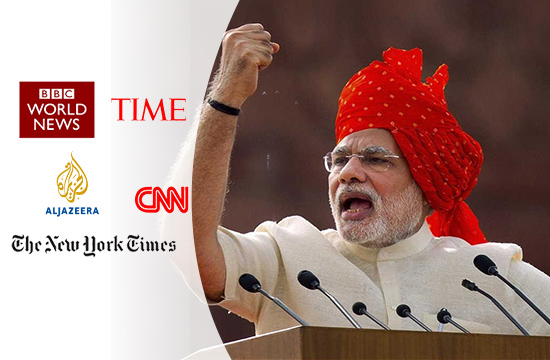 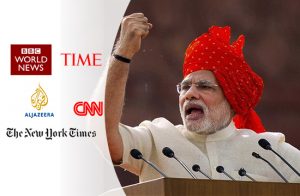 Modi represents a powerful, self-reliant, and developing India – something that the West doesn’t want to see.

You don’t need to watch the BBC or read The New York Times to gauge the appalling level of bias that infects the Western media in its reportage on India.
Of course, it shouldn’t matter.
The footprint of Western print and electronic media in India is shrinking. Few watch the BBC or CNN. Neither features in the Broadcast Audience Research Council’s (BARC) top ratings.
The BBC’s Indian language service and digital media offering suffers dwindling credibility.

It wasn’t always so.
On October 31, 1984, when PM Indira Gandhi was assassinated by her bodyguards, her son Rajiv — who was on the campaign trail in West Bengal at the time — said he believed the news of his mother’s death only after he heard confirmation on BBC radio.
Rajiv’s colonial reflex was excusable. He was born three years before Independence. India had been reduced to penury by 190 years of the malign British Raj (about which the economist Professor Utsa Patnaik has recently written a detailed analysis that requires, and will receive, follow-up action).
Indian media was rudimentary.
Foreign media filled the vacuum.
Over three decades later, the tables have turned. Western media is facing an existential crisis. Advertising revenue has dried up. Circulation of dailies is falling. Western TV networks are losing viewers to digital platforms across both news and entertainment genres.
Indian media, in contrast, is growing robustly, driven by rising purchasing power and a new audience in smaller towns.
As the influence of Western media has shrunk, its anti-Indian tone has acquired new venom.
Earlier, the tone was patronising. Now, it is filled with invective. A false narrative is fixed. Facts are moulded to fit that narrative. The arrival of the Narendra Modi government sharpened the invective.
Here was a PM who, unlike the colonised Lutyens’ dynasts of old, refused to grant access to Western journalists. They reacted with an outpouring of bile.
In Britain, Roger Boyes wrote in The Times: “We can warn our Indian friends, in case they haven’t worked it out for themselves, Mr. Modi is potentially big trouble.” (In case they haven’t worked it out for themselves. Note the superciliousness).
Amol Rajan, The Independent’s Indian-origin editor, wrote: “The charge sheet against Narendra Damodardas Modi is familiar and well-founded: the stench of Hindu nationalism covers him.”
What drives such journalism, much of it drivel?
Why does Modi provoke such intolerance in the Western media?
Here’s what I wrote in 2014: “The answer is largely cultural — Modi doesn’t fit in. He’s neither a clubby sort whose mind Western journalists can pick over Darjeeling tea, nor a jokey regional leader who craves Western attention and can be mocked behind his back. Modi regards the Western media — not all of it but much of it — with the same contempt it reserves for him. He gives them minimal access. He does them no favours. He asks for no editorial favours in return.”

The Anglo-Saxon (American and British) branch of Western media hunts in packs.
At crucial moments, they function as propagandists for their respective governments.
During the 1990-91 Gulf War, for example, CNN acted as the voice of the US military, dealing in fraudulent narratives to discredit Iraqi forces.
More egregiously, British and American media launched a choreographed campaign against Syrian dictator Bashar al Assad to help the US, British and French governments effect regime change.
The six-year-long propaganda campaign failed after Russia’s intervention in the devastating Syrian civil war where terror groups opposed to al-Assad were armed and funded by the US and its allies.
The most recent example of how “independent” Western media organisations are co-opted by their governments is their complicit silence over the humanitarian crisis caused by the brutal Saudi-led war on Yemen.
The Saudi-UAE assault, backed by US, British and French weapons and logistics, began in March 2015.
Nearly four years later, after 10,000 civilian casualties and millions of Yemenis near starvation, Western media has suddenly woken up to the tragedy. Their silence for much of the ruinous war shows how easily Western newspapers and television networks bend to their governments’ will.

When the narrative is pre-meditated and facts scrambled to fit that narrative, errors abound.
In an error-speckled piece by the editorial board of The New York Times titled Narendra Modi’s Rise in India, the newspaper wrote: “Modi’s economic record in Gujarat is not entirely admirable. Muslims in Gujarat, for instance, were much more likely to be poor than Muslims in India as a whole.”
When the error was pointed out (Muslims in Gujarat are actually among the least poor in India), The New York Times was forced to recant: “An earlier version of this editorial relied on a 2012 Indian government report on poverty rates, which included the rate for Muslims in Gujarat in 2009 and 2010. Newer data shows that poverty among that group has declined substantially in the last two years.”
The BBC’s strategy is more nuanced. In its recent contentious story on how fake news spreads hate crimes, it used an “ethnographic” methodology – rather than a large, straightforward sample survey – to arrive at half-baked conclusions.
The Washington Post has been equally capricious in using data sets from Indian fact checkers that don’t hold up to public scrutiny.
The antidote to bad journalism is precisely such scrutiny. With digital media offering real-time scrutiny, it’s “time’s up” for biased Western media narratives.

(The author is founder-editor of Gentleman and Business Barons. Courtesy of Mail Today)